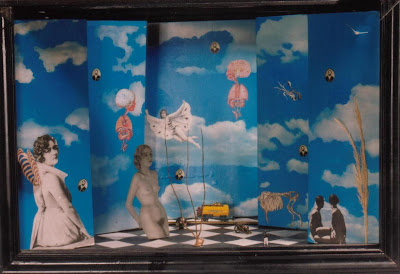 Luis Manuel Serrano's exotic collages and constructions come from his love of making 8 mm and 16 mm films. Each scene is set for a story complete with a script. According to Teresa del Conde, who is the Director of the Modern Art Museum in Mexico City, " He does this in a mode reminiscent of Joseph Cornell. This he achieves by making his collages tridimensional. His assemblages may represent stagings set during the first few decades of the 20th century. They describe a fondness for certain things. They are rather moving and deeply nostalgic. He saves seemingly unconnected objects from oblivion. In Luis Mauel's work there are crystalized tears, which are actually small vials, and even tears of blood; there are pins used to hold up feminine coiffures that hold a certain aggressiveness. A Boticelli Venus' hair becomes real while Don Gabriel Figuera's clouds become steel shavings."
The museum has a beautiful illustrated catalogue of Serrano's works , which are included in many public as well as private collections. I am including his "A Night in the Opera", but you can see many more works from private collections, as well as works for sale on his blog. Mexico has given us a great gift. This is a man worth watching. His website is:
http://lmserranodiaz.blogspot.com
Posted by Beverly Kaye at 8:59 AM

This is wonderful! And does remind me of Joseph Cornell's work...which I adore!

Pretty good post. I just stumbled upon your blog and wanted to say that I have really enjoyed reading your blog posts. Any way I’ll be subscribing to your feed and I hope you post again soon.