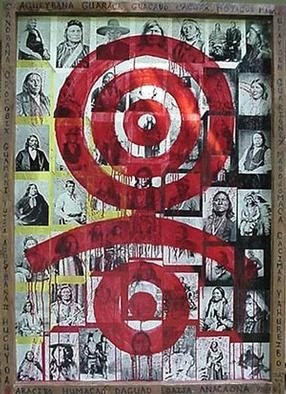 The collage "Portrait de Genocide", a powerful statement by Pedro Martin DeClet, is typical of his works which often examine his personal struggles and those of society. He first started exploring art while incarcerated, and a liberal prison system encouraged his efforts and allowed him to leave the premisses to attend his first show, beyond prison walls. This monumental work honors fallen heros, Latino as well as American Indian. The red pictograph of the human spirit bleeds for them and their sacrifices. Much of Pedro's work is in diary form, and he excels at painting, collage, sculpture, as well as assemblages.
His prison years and his involvement with the Latin Kings are far behind him, only occasionally resurfacing as fodder for his art. Pedro is exquisitely aware of the art world, and the poetry and prose of the most renowned authors and wordsmiths; however, his work is not at all derivative. It is purely his own vision, his own pain. Although completely self-taught, his frequent use of both Latin and Spanish text within his work gives it a unique sophistication. His self-portraits reveal him as he is, sweet, moody, confrontational, scarred, and hopeful. Pedro has had several museum shows and his work is held in many private collections.
Posted by Beverly Kaye at 9:33 AM