Years ago, as many private dealers are wont to do, I participated in a folk art tour, which included a dealer's row. Translation, all dealers registered at the show were placed on the same floor and were allowed to set up their rooms as booths. It was a bustling and affluent crowd and many paintings and sculpture were sold. Across the hall from my room was dealer Jimmy Hedges, Rising Fawn Folk Art from Tennessee, who brought with him an artist from Miami who he had great faith in, rightly so. Late one of the nights, the artist slipped out for a bit of fresh air. He had been painting and speaking with collectors all day. When he tried to return into the hotel, he was stopped by the staff. Refused reentry. He was a poor, black man, and didn't seem "a fit" with the guards. Eventually the artist, Purvis Young, was allowed access to his room.
He died yesterday of a heart attack after a kidney transplant, dialysis, and a long fight against diabetes. He died as a world renown and deeply loved artist. He was a genius, a loving soul, and a keen reporter of life in Overtown, a slum neighborhood in Miami where he lived his life and created masterpieces from recycled materials and paint. His access into museums was a much easier ride than his access back into that hotel. For all who had the pleasure of knowing Purvis, either personally or through his art, I share your pain, and am brokenhearted.
Posted by Beverly Kaye at 7:06 AM No comments:

Sculpture in the Garden Show, 2010 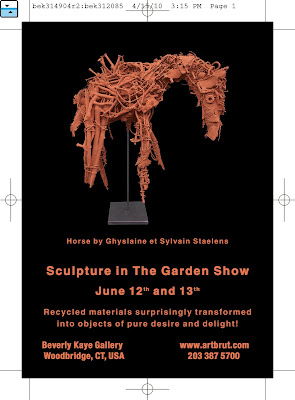 It's almost time! Kids are getting restless, their parents are eyeing their gardens, searching for an empty, but deserving spot. Childless collectors practice their best "I've just come to look" faces, and the fun begins! The annual Sculpture in the Garden Show featuring works of art made from recycled materials and junk yard finds, is almost upon us. Here's a sneak peek at the ad which will be published in the stunning and delightful international art magazine called Raw Vision. The issue will be out in May, the dates to hold are Saturday and Sunday, June 12th and 13th. Collectors with flashlights who show up Friday night, please try to wait your turn! You know who you are!
Posted by Beverly Kaye at 3:33 PM 1 comment: 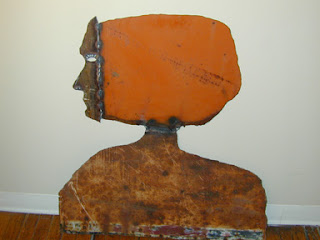 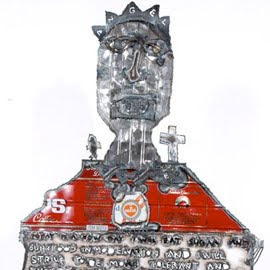