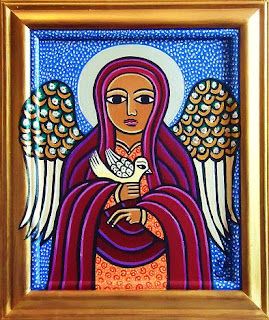 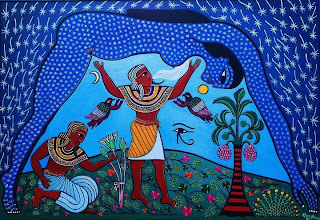 With an Antiguan heritage and a love of subject matter, both secular and religious, self-taught artist Laura James has made quite a splash in the art world. In the year 2000, she completed thirty four images commissioned by the Catholic Church for their new version of The Book of Gospels. Each of these inclusive and magnificent paintings, which were first on display at the Divinity School at Yale University in New Haven, CT, have been sold. So have all her works in a series called Nannies and Other Mothers.
A new body of work featuring goddesses, such as the revered Mami Wata, and guardian angels, has just been delivered to the gallery and will be here through July. This is a rare opportunity to see an entire body of Laura James' paintings, and her elegant presentation copy of The Book of Gospels will be on display during this show.
Posted by Beverly Kaye at 12:57 PM 4 comments: 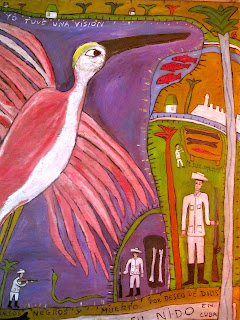 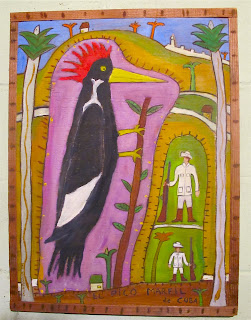 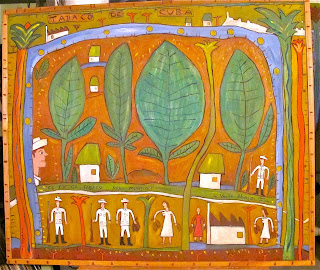 Baron Corso de Palenzuela was only 8 years old when his titled family fled Cuba to avoid Batista's corruption. The trauma of this sudden and unexpected move from their beloved homeland has remained with de Palenzuela and is clearly evident in his art. His memory paintings, depicting the family's luxurious life in Cuba, illustrate both love and loss for Corso the child, and haunting fragments of memory still carried by Corso the adult.
In his paintings, the main figures are always large and in the foreground, flat in perspective, often flanked by both armed soldiers and the lush vegetation of this tropical paradise. White deer, called Dama Dama, almost forced into extinction because of their prized flesh, white peacocks whose feathers are decorated with gold coins from the family's fortune, white dogs both prized for their hunting skills and their devotion as family pets, enormous fields filled with sunflowers, cocoa and tobacco, and mother tending to her gardens, fill de Palenzuela's colorful canvases.
There is a strong folk aesthetic to this unschooled work which has been shown at the American Visionary Art Museum, The Miami Fine Art Museum, The Jewish Museum in NY, The Havana Municipal Museum, and Vassar College. The artist's spiritual side, reflecting his Sephardic heritage, is depicted in powerful biblical paintings with illustrative text. Corso de Palenzuela says, “I’m religious, but I don’t believe in institutional religion. I’m more of a mystic.” These wonderful paintings are mystical indeed! Most of the work is painted in oil on random shaped boards, often surrounded with framing constructed to protect these vivid and cherished memories. There are fascinating stories told in each work and a goodly amount of the vintage pieces are still in the artist's personal collection.
Edward Gomez wrote of de Palenzuela in Raw Vision magazine, these paintings go “…far beyond the Cuban-American dominated zones of Miami and South Florida reflecting both increasing and broader popular interest in Latin-American culture in general, and the ever-widening scope of the Outsider Art world, where interest in styles, techniques or themes associated with particular peoples or places has significantly enriched appreciation of the genre.” De Palenzuela's work has also received glowing write-ups in the New York Times on four occasions.
Vintage and current works by Corso de Palenzuela are now available at the Beverly Kaye Gallery in Woodbridge, CT tel: 203 387 5700
Posted by Beverly Kaye at 6:01 AM 15 comments: