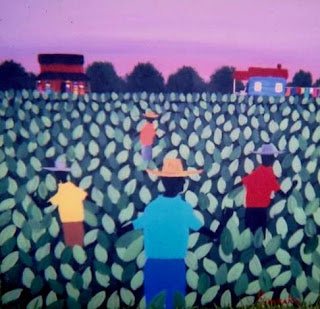 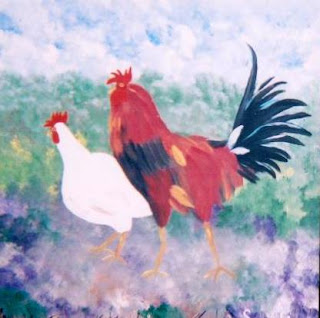 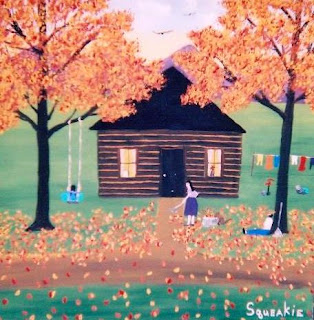 "James Stone has been called "Squeakie" for as long as he can remember. He was born in Georgetown County, South Carolina, in 1951. When he was growing up, the family moved every few years or so because his father was a sharecropper and carpenter, and they moved where the work was. Squeakie started work at "handing" tobacco (passing the leaves on to a worker who strung it for drying) when he was just five or six years old. As he got older, he was involved in all aspects of the operation, from pulling plants, setting tobacco, hoeing, cropping. And he picked cotton. He worked in a few factories and grocery stores over the years, and then began working as a house painter about thirty years ago." Check out his website to hear the rest of this self-taught artist's story and see more of his work.
Posted by Beverly Kaye at 4:04 PM

Very interesting Beverly! I'll have to go to his website to find out more! His folk art is wonderful! And I'm trying hard to see whether his work is all paint or if it's a mixture of painting and collage! I'll find out! :-) Thanks for finding and sharing his work!

I JUST PICKED UP A COUPLE OF SQUEAKIE'S WORKS AND I AM VERY PLEASED WITH THEM. PLAN TO RETURN FOR MORE FOR OTHER MEMBERS OF THE FAMILY. HIS WORK DEPLICT THE WAY OF LIFE ON THE FARM IN THE 20'S THROUGH THE 60'S IN SOUTH CAROLINA.
DOUGLAS EDGEWORTH .KINGSTREE SC.