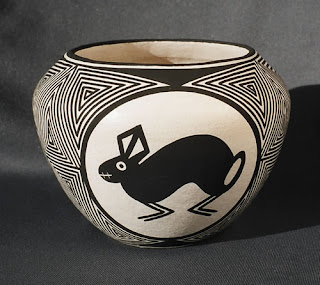 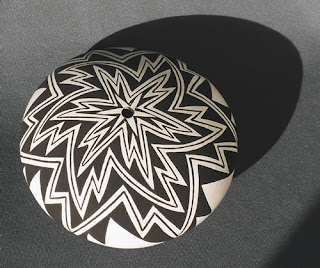 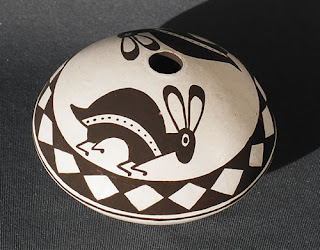 Lucy Lewis was a matriarchal Pueblo Indian artist, whose works are in permanent museum collections all over the world. She lived and worked at Acoma Pueblo, carved into the top of a sandstone bluff called Sky City, an hour's drive west of Albuquerque, New Mexico.  Lucy brought renewed interest in old designs, such as the lightening jar and the bear heart line. Her pottery was graceful and much admired, and all of her daughters, as well as her son Andrew, became potters in their own right. Nieces followed in the family tradition and some of the finest and thinnest walled pieces bear the Lewis name. Click on the title and you will see more of this collection, which I hand picked during memorable visits with the family in the 1980's and 1990's.
Dolores and Emma Lewis were gracious hosts and thanks to them I was able to meet Lucy and watch as she painstakingly decorated some of her final pots. The last time I saw Lucy, a French film company was making a video of the pottery process, which was eventually titled "Daughters of the Anasazi". If you can find a copy, it is a detailed  and fascinating explanation of the entire process, from the hunting for the clay to the dung firing. All of the pieces shown in the link are now offered for sale.
Posted by Beverly Kaye at 2:39 PM