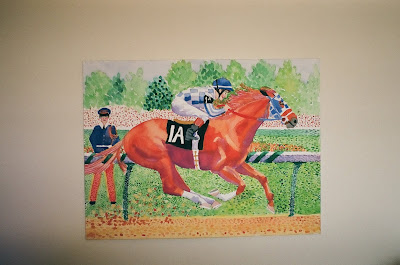 Please read this Mother's story about a son whose school suggested he work in a sheltered workshop making nylon pot scrubbers. Hat's off to all Mother's who hold on to a dream for their children and have the fortitude to never let go.
"Michael Jurogue Johnson is entirely self taught. When he graduated from a special education
public school at the age of 21 he didn't want anyone telling him what to do! He learned how to
paint and in 1999 a young couple wanted him to paint portraits of their dogs. They kept sending photographs of their dogs laying around in the garden. Finally Michael did an oil painting of their dogs playing on the beach. He could get a pretty good likeness as long as he could paint his own ideas. Since 2000 he has painted more than 500 portraits of pets, children, houses, a few older people and racehorses. The portraits and the illustration jobs have expanded his subject matter and have challenged him to develop new techniques.
Michael works in oils, acrylics and watercolors. He has no fear of a blank paper or canvas, he just starts painting. He uses bright colors freely and naturally. The colors don't clash, they harmonize. He paints from a cheerful and innocent point of view. He has a limited grasp of perspective but a great eye for detail. Forget washes! Michael wants to paint every blade of grass, every leaf on the tree and every pebble on the beach. He likes to paint all day long and listen to music.
Painting is his job, not his hobby. He sells from his website and has been painting for 17 years.
You can see his current work at: http://www.artistmichaeljohnson.com"
Blood Horse gave Michael many magazines so he could study the physicality of the horses and when he picked up his brush to paint, the work was amazing. The Down Syndrome Association of West Michigan auctioned off the paintings and raised a large amount of money with Michael's art. So much for the school which wanted him to go into a sheltered workshop and make nylon pot scrubbers the rest of his life! Happy Mother's Day to his mom, Robin from an art dealer who was also blessed with a Mother who understood her love of art.
Posted by Beverly Kaye at 6:36 AM

Wow, nice to find something that reflects the kind of art that my boyfriend creates. There seems to be a bias against artists who don't fall into the realm of "art school"; who have doodled and created wonderful works of art but are snubbed due to lack of training. It wasn't until a few weeks ago that we even knew that "art brut" existed, that's how confined and restricted the art community is. My boyfriend contines with his work, creating art that means so much to him and to me without the recognition. Bravo to you. It's nice to know that art doesn't necessarily have to fall within the confines of a trained artists. Primitive art? No way, these artists create from the soul, not by measures set down by art schools. Thank you! Katie